At the beginning of fall, I start dreaming about tamales: green corn with chili, red chili, plain smothered in tamale sauce, even sweet tamales filled with nuts, dried and fresh fruit such as apples, pineapple and cinnamon. Yum! They are a traditional ethnic holiday food. So when the weather starts cooling off, I start planing for the holiday season. Tamales can be made ahead and frozen, then reheated before serving, so they are something I can make early… ahead of the holiday rush. The only problem is that I often have to make them again, later, because they are so good they tend to disappear before it even gets close to Dia de los Muertos, let alone Thanksgiving or Christmas!

Tamales are a traditional Mexican dish that dates back to the Ancient Mayan peoples. They are basically a stiff dough, (referred to as masa,) wrapped in some kind of leaf and then steamed or boiled. The outer wrapping is discarded when they are eaten. They can be served hot or cold, plain or with a sauce.

In addition to the dough, they can be layered in the center with meats, cheeses, vegetables and fruit. The most common dough is made with corn, but they can also be made with other grains, beans or legumes.

The most common tamales you can find are made with corn masa, mixed with manteca (lard), filled with red chili pork or green chili chicken. The second most common is similar, but has masa, green corn and a green chili and cheese filling. Since all of these include animal products, this year I’m making a new version: totally vegan!

Vegan tamales can present a few challenges, since the purposes of the manteca is to add flavor, fluffiness, moisture and pliability to the dough, it’s important to find different ways to achieve the same results. Here’s what worked for me.

We will start off the week with basic corn masa. Here is a complete list of ingredients that I used, but you should read through the entire post before you make these for the first time.

See the recipe below for the ingredients.

First you must rehydrate the dry masa flour with hot water. This is pretty simple. Here’s the setup. 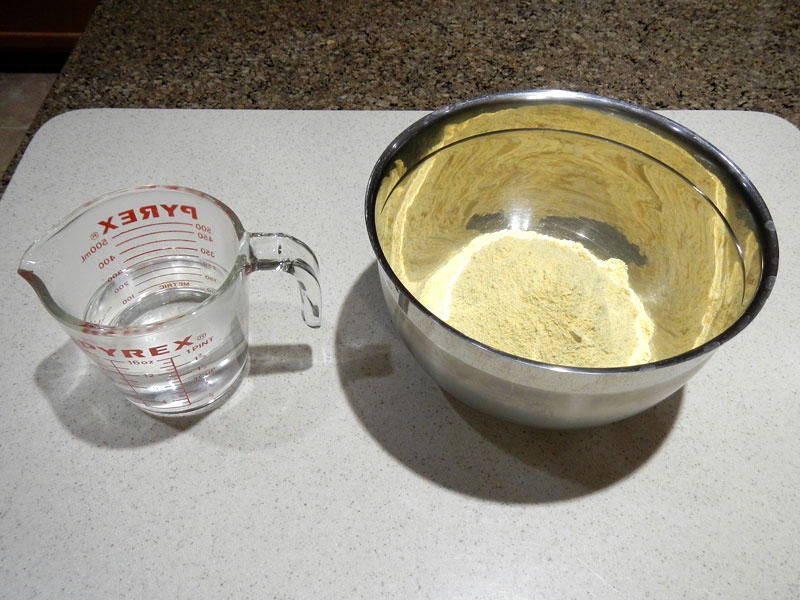 Put the masa flour in the bowl. Pour in the hot water. Use the pastry cutter to blend the water into the flour until a fairly dry dough forms. It should be fairly dry, but stick together when you press it all together with a spatula, like this. 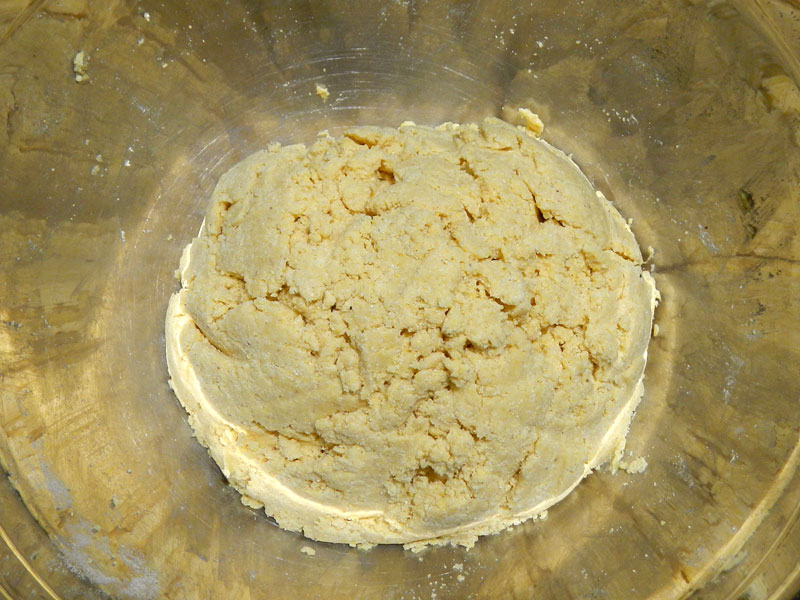 Push all the dough together and wrap with saran wrap. 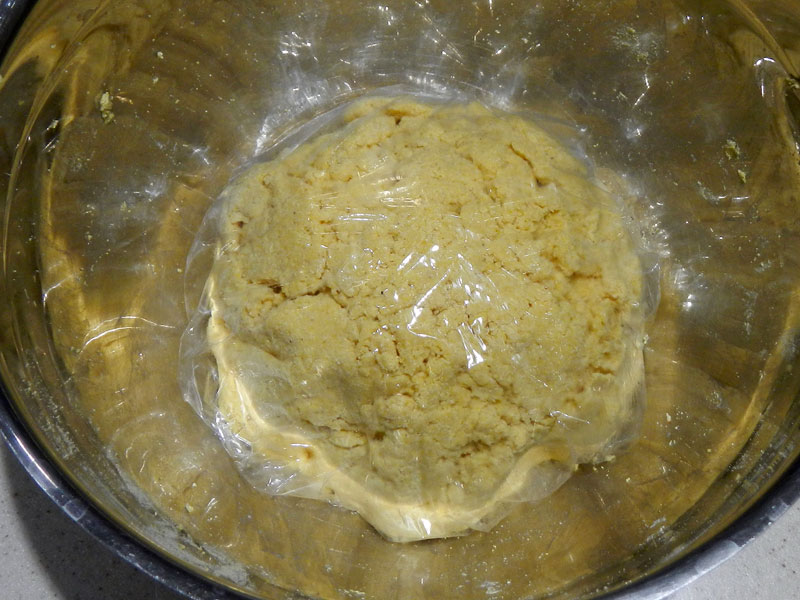 Set aside for at least 30 minutes. The plastic wrap keeps the moisture in, so it doesn’t dry out while the dry ingredients are rehydrating.

You can make this the night before and put it in the refrigerator until the next morning if you wish.

Next you will be blending the rehydrated masa with the fat and other ingredients to make a completed dough. I forgot to put the oil in the picture, but here’s the rest of the setup. 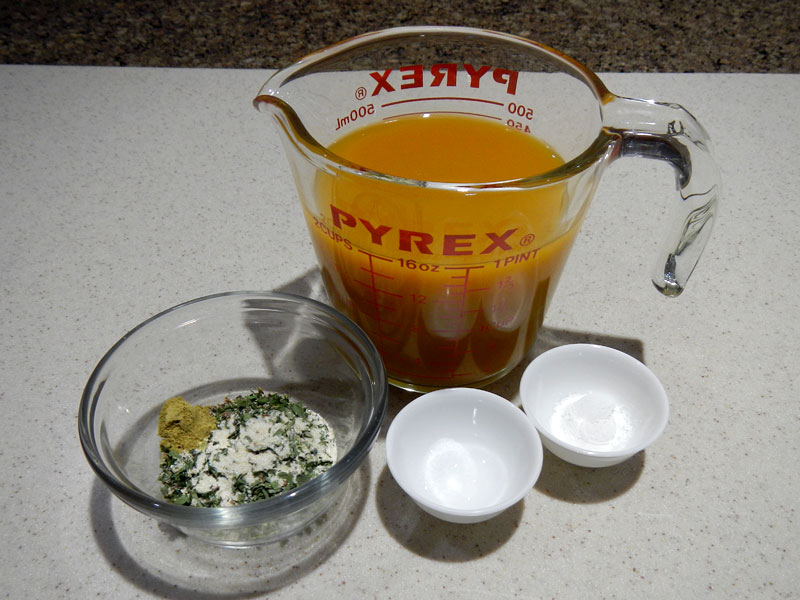 The liquid in the pitcher is vegetable broth. As it turned out, I didn’t need it, your mix may or may not require it. 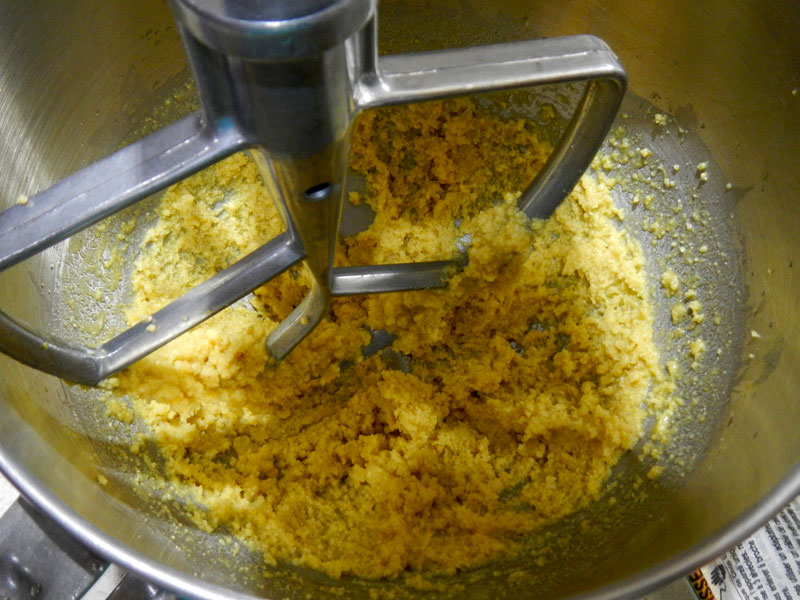 Keep adding the rehydrated masa, a little bit at a time. If the mix is too dry, and crumbly, add more oil.

You should not need more than 3/4 cup of oil for this amount of masa. If it is still really dry and you have added the full amount of oil, add vegetable broth or stock, rather than more oil.

This is the consistency it should be when you have all the rehydrated masa in the mixing bowl, and up to 3/4 cup of oil. 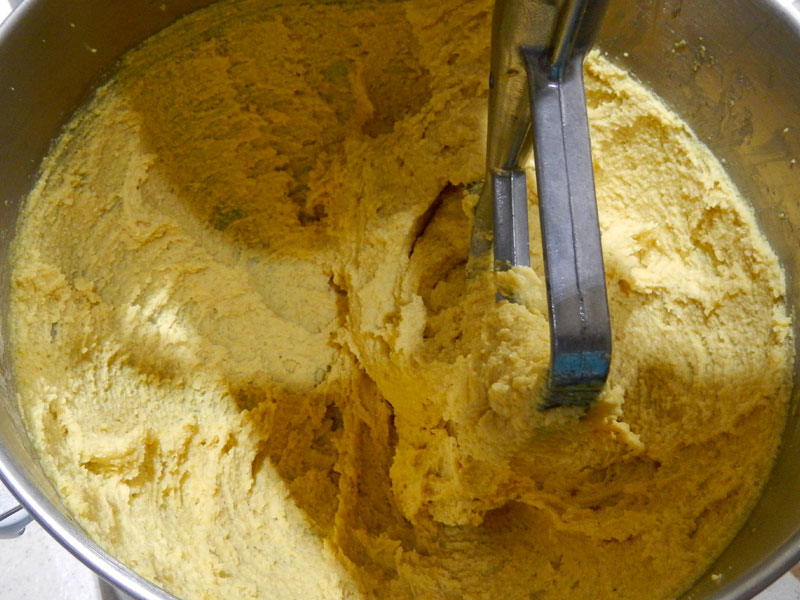 Now you can add in the salt and baking powder. If you are adding any optional ingredients, they go in now, too. 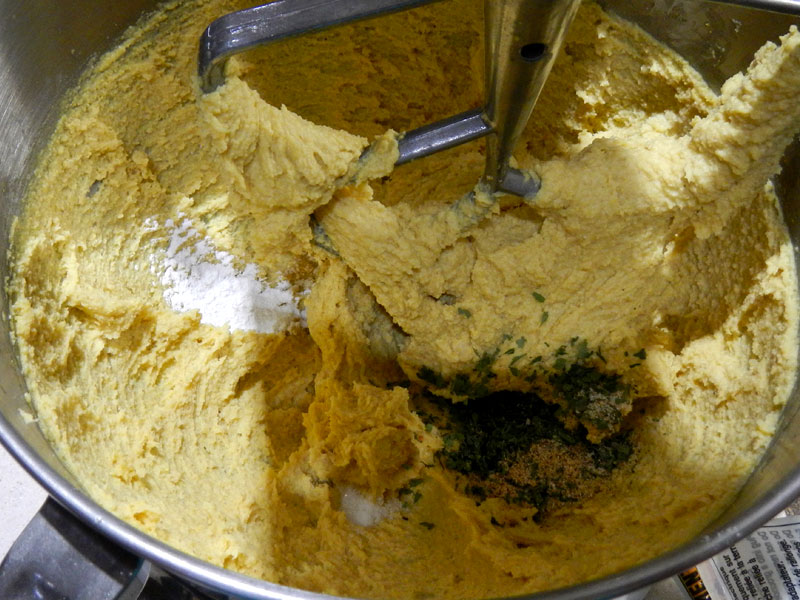 Mix, mix, and mix some more. The secret to light, fluffy masa is to get as much air into the dough, along with the proper balance of fat, masa and liquid as you can. When you are making traditional tamales with manteca, you know the dough is “done” when a tablespoon of it floats in a bowl of water, instead of sinking to the bottom. Unfortunately, that doesn’t work for the vegan variety (although it might work if you are using coconut oil) but I did discover that when the dough starts sheering from the side of the bowl while the mixer is running, it’s done! That looks like this. 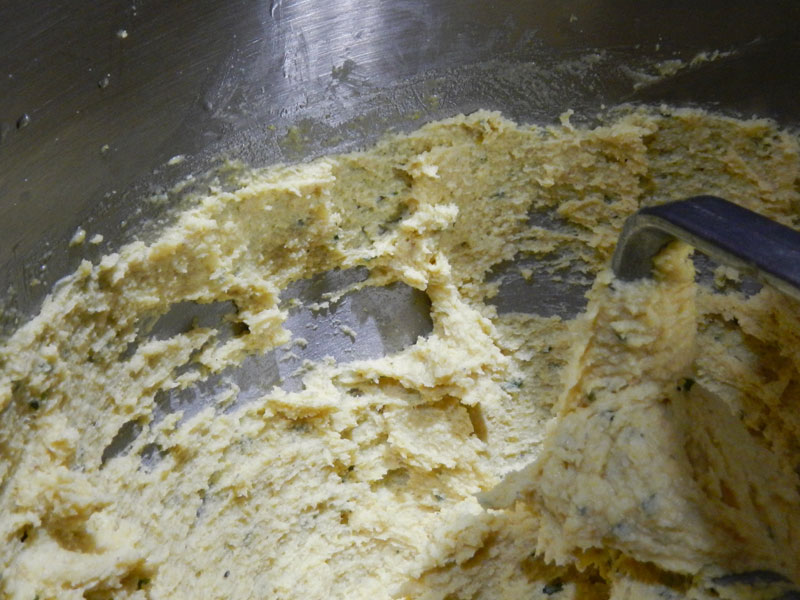 When this starts happening, you can stop mixing.

Push all the dough to the center of the bowl with your spatula. You can now use it, or refrigerate it if until you’re ready, if necessary. 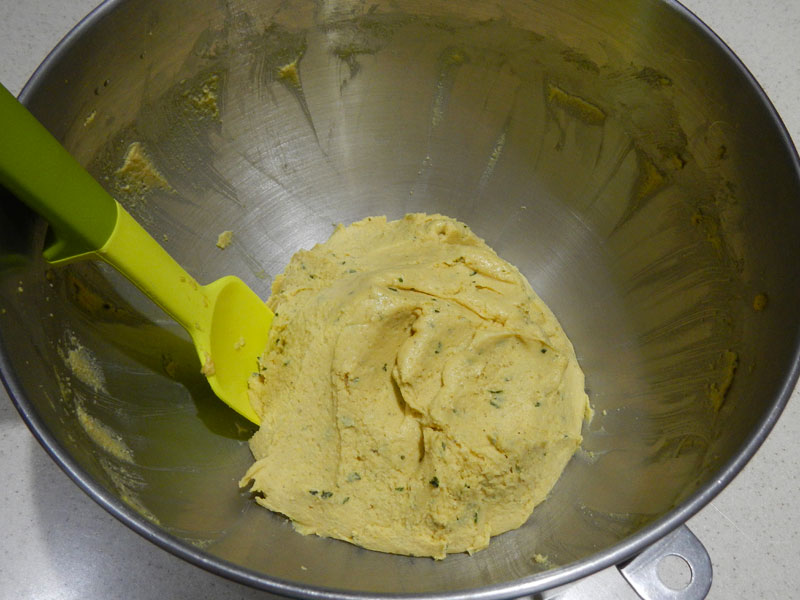 This amount of dough will make a dozen really fat, dough only tamales or 1-1/2 dozen tamales with additional stuffing.

Using the Bob’s Red Mill Masa, I didn’t need to add additional broth or water while mixing. I have needed it with other brands of dry masa.

The Bob’s Red Mill is also the best tasting masa I’ve ever used. I highly recommend it.

The water for rehydrating the masa needs to be hot, but not boiling. For most households, the hottest water that your kitchen tap will produce will work. Cold water works, it just takes a lot longer for the mix to rehydrate completely. If you use cold water, it’s probably best to put the mix in the refrigerator over night.

When you are rehydrating the masa in the first step, you can use vegetable stock or broth instead of water. It is another way to add flavor to the masa. Just heat it up to at least 100-120 degrees first.

I like olive oil in these better than canola oil. I like the taste of a full-bodied, fruity olive oil. Not everyone does, so use what you prefer.

This recipe calls for baking powder… not baking soda!

I happen to like the masa way better with the optional seasoning than without it. However, it’s not necessary, and traditional tamales don’t usually include it.

You can include up to 1 cup of additions, such as roasted corn kernels. Mix them into the dough right at the end, after its starts sheering away from the wall of the bowl. I usually add corn to the green chili tamales you’ll see later in the week.

The biggest secret to making light, fluffy tamales is to beat the dough long enough! The stand mixer will run, with the speed set at about 4 for as long as 1/2 hour without to many problems. Using a hand mixer gets really tiring. I strongly recommend a stand mixer for this project!

Tomorrow: Alternative Masa (not made from corn)