I have been mostly without bread products of any kind for months. The problem is that most of the gluten free commercial bread products that I like are not vegan. They contain eggs. In particular, I like the Canyon Bakehouse bread. I’ve tried their Hamburger Buns and their Cinnamon Raisin Bread . Both are really good.

I also like the Sprouted Corn Tortillas from Food For Life . They are vegan and I eat a lot of them, since they are pretty much the only bread-like thing around here. But you can only do so much with a corn tortilla!

Recently, I’ve talked to several people about making some kind of GF flour tortilla replacement and nobody had any good ideas. The main consensus was that none of us liked anything commercial we’ve found so far.

I used to make a wheat flour flat bread. We ate a lot of it because it was so versatile. I got to thinking that there must be some way to make it work GF. I tried the following as an experiment, and was thrilled! It worked! 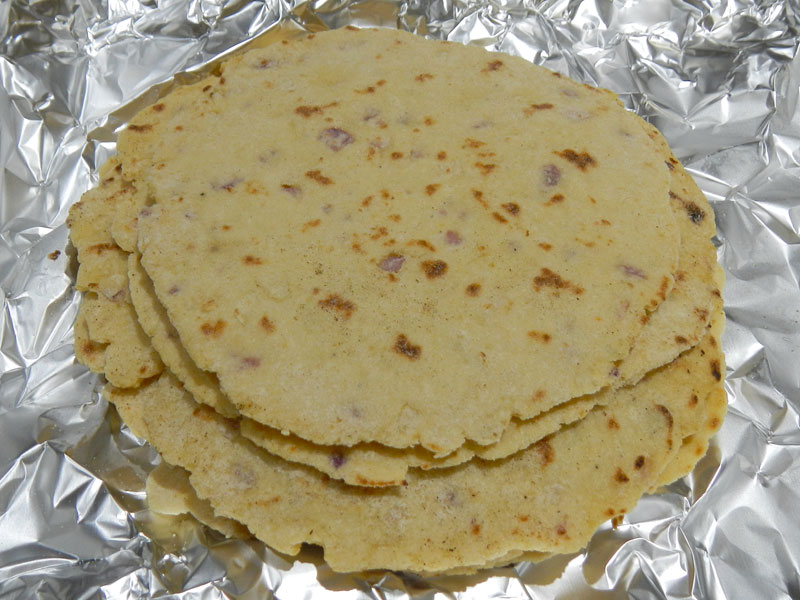 These look almost like what I used to make! They are a bit darker in color because of the flours I used, but they tasted great, cooked properly and worked really well. I did have a few foibles, which I’ll point out in the notes, but they weren’t insurmountable, and I will watch out for them next time.

The first decision I had to make was what to use for the flour mixture. I knew I wanted to use Quinoa because of the protein. I also thought Tapioca starch would be just too “light” for these. Here’s what I ended up using.

To use, whisk mixture. Then measure out the amount needed.

Stir the sugar into the water until it dissolves. Stir the yeast into the sugar water with a fork or a whisk. Let sit until foam appears on top. If you don’t get any foaming action, your yeast is “dead” and you need new yeast before going any further.

Whisk salt and optional seasoning (if used) into flour.

Put flour into the mixing bowl on your stand mixer.

Add onions to the seasoned flour mixture. Mix on low speed until the onions are thoroughly coated with flour. Let sit for 15 minutes.

Stir the oil into the water. Immediately pour the mixture into the mixing bowl, running at a low speed.

When all of the liquid is incorporated, increase the speed of the mixer and continue mixing for up to 5 minutes.

Remove the bowl from the mixer, and put it in a warm place, covered with a dish cloth, for 30 minutes.

Use brown rice flour for the bench flour.

Sprinkle the rolling area liberally with bench flour. Roll the rolling pin through the flour to coat it.

Turn the dough out onto the work area. If it is very sticky, dust it with more bench flour. Knead a few times.

Roll the dough into a log and divide into 8 portions.

Flatten and cook one portion at a time. Use your hands and as much bench flour as necessary to flatten out the portion.

Roll the portion lightly to make it as flat as you can, but still be able to pick it up and put it on the hot comal. Place the flat bread on the comal.

It doesn’t take very long to cook these!

When it is first put in the pan, it will start bubbling. As soon as bubbles stop forming, if the pan is hot enough, you should be able to flip it over. Cook for another minute, then transfer to a platter.

I normally use brown sugar or some other molasses-containing real sugar (Sucanat) for proofing yeast. It works better than white table sugar.

The time to flip these is when the bubbles stop forming and there are a few brown spots on the other side.

It’s better to under cook these than over cook them. They are meant to be soft and pliable, not stiff, like crackers.

If the dough is still too sticky after kneading it a bit, you need more flour. If it is too dry, add more oil, not more water!

This dough should be soft, not too sticky, and you should be able to roll it into a thick log. If you can’t do that, or it’s sticking to you, the rolling pin and the work area, it needs more flour and oil! When I made these, my dough was too sticky at first. I put a few tablespoons of oil on the work surface and in another spot a few tablespoons of brown rice flour. I went back and forth, rolling the ball of dough in one or the other, then kneading a bit, until the texture was right. Silky smooth, not sticky and a bit elastic. I know this isn’t a precise measurement, and I’m sorry. I will come back and revise this post when I figure out the exact amounts.

Picking up the flat bread to put it in the pan can be a bit tricky. The rolled out dough is easier to pick up if there is enough bench flour under it, so it’s not stuck to the work area. Use a thin, large spatula or pancake turner to loosen it before trying to pick it up.

If the dough tears while moving it to the pan, push it back together as soon as you start it cooking. It should stick back together if you do it immediately.

Having more than one set of hands makes this a lot easier. Have one person cooking while another is rolling out the next flat bread.

I can’t tell you how happy these made me! OMG! Something that’s very close to my old flat bread and that I can use for tortillas! I was full after eating the plate of food below, but I still wanted to eat more. I didn’t, but they made me that happy!

Here’s how we served them. 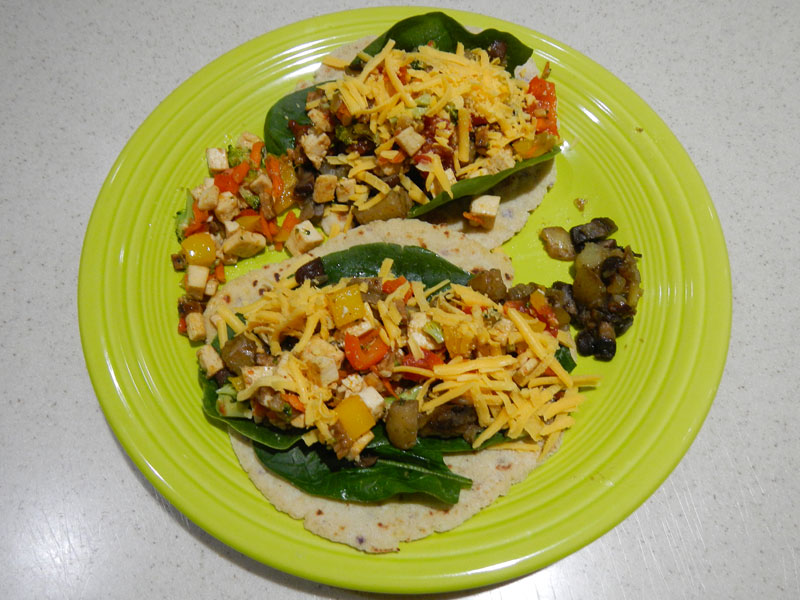 We used them as tortillas. We put spinach leaves on them first to keep any liquids from soaking into the bread. Then we added fried potatoes (fried potatoes, onions and mushrooms with rosemary and thyme) and tofu-veggie scramble. They were topped with vegan cheddar cheese.

As you can see in this pic, these were soft and “bendable” without cracking. 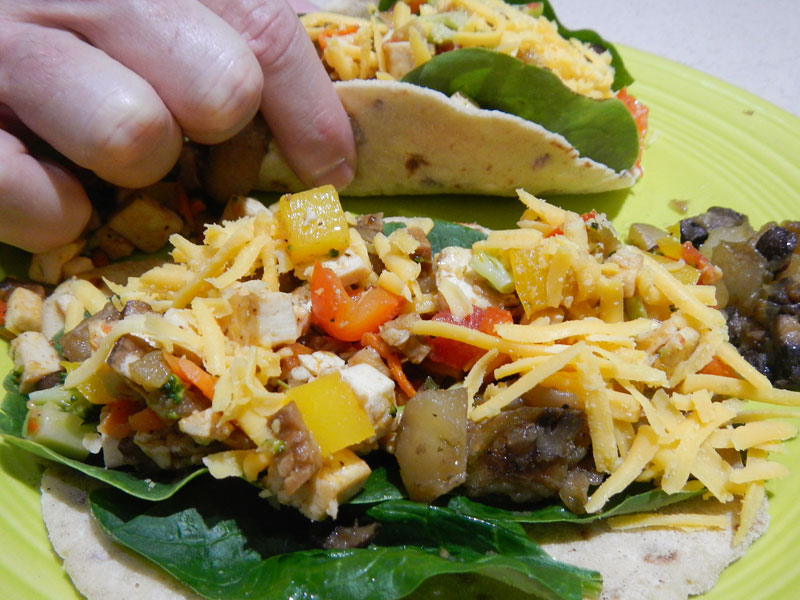 It was really delicious!

Next I’m going to try a few small modifications to this recipe and see if I can turn it into pizza dough! I did that with the original wheat recipe, so I hope it works with this new version, too! We haven’t had home-made pizza in almost a year, so it would be really cool if I could figure that out!