Halloween is one of my favorite holidays. A while back, I got this cookie cutter.

It’s the Fred and Friends Gingerdead Men Cookie Cutter/Stamps , and it’s under 7 bucks on Amazon! F&F has all kinds of fun and funny gadgets that will make you smile, some for the kitchen, some for entertaining, and many for around the house.

I knew I wanted to make a chocolate pumpkin cookie dough for these. I figured it would be nice and dark, showing off the frosting well.

Little did I know, when I bought it, that I would also be baking gluten free. While that’s had it’s own share of challenges, I did figure out this recipe.

A lighter GF flour mixture is recommended for this recipe, for example one that is rice flour, sorghum flour and tapioca starch should work well.

The flax/water mixture is the egg replacement in this recipe.

You can use all dark brown sugar or all Coconut Crystals, any combination will work.

If you want to refrigerate the dough over night, pile the dough in the center of a piece of plastic wrap. Wrap it up well, and place in the refrigerator until the next day. 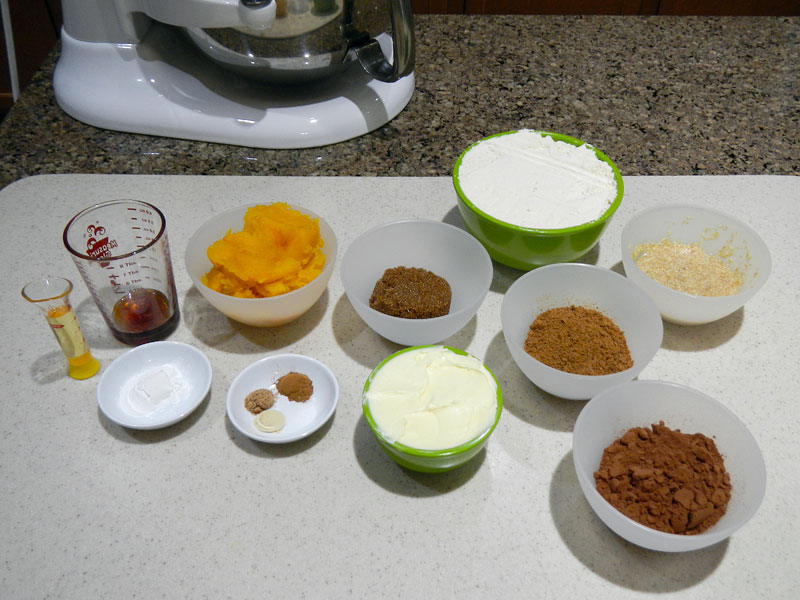 The dough is a bit sticky, so the wax paper helps a lot for rolling it out. 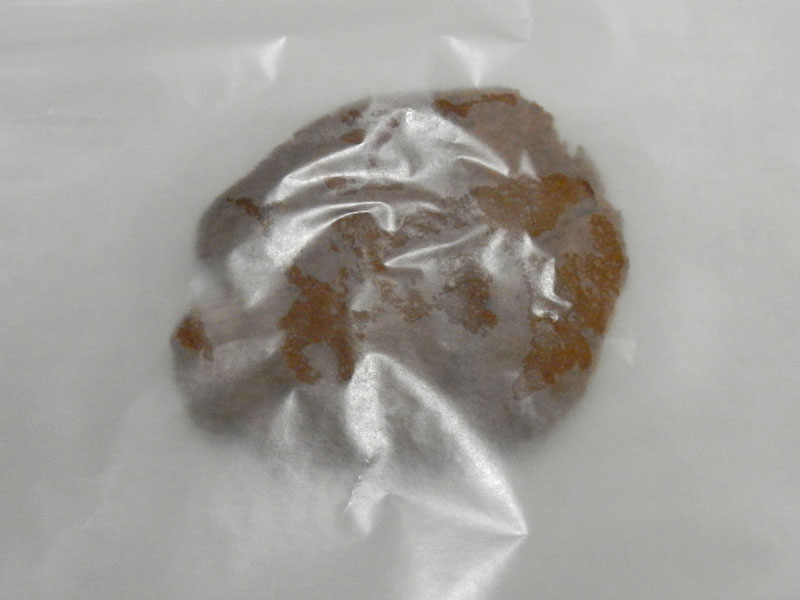 I had a bit of trouble cutting out the cookies and stamping them. I ended up putting the rolled out dough back into the refrigerator for a few minutes before cutting, and before stamping to make it firmer. As you can see on the cooling cookies below, I got enough of the image on them to see where the icing should go. 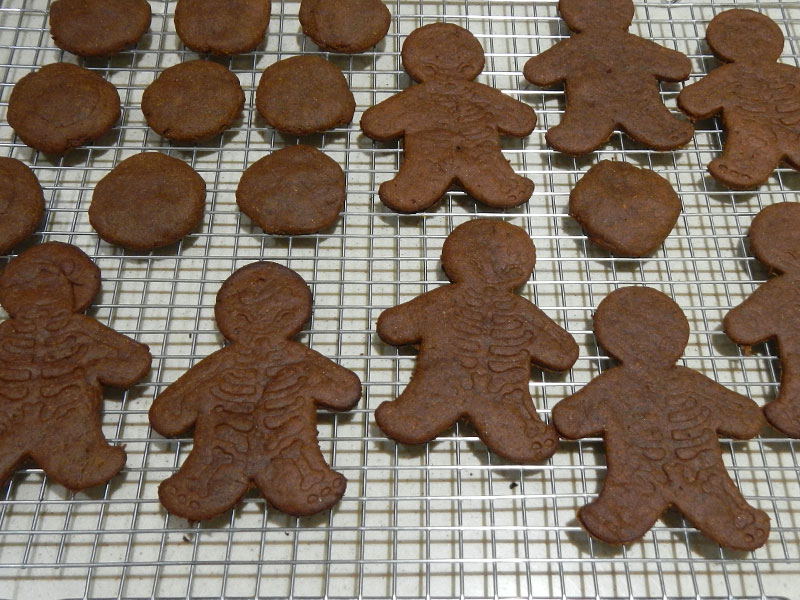 Now I had another dillema, how would I make Royal Icing without the eggs and sugar that are normally used in it? This is what I ended up doing.

Leftover icing can be frozen until needed. Defrost in refrigerator.

Put icing in a squeeze bottle to make it easier to control when painting cookies.

Icing does not stay “white” on cookies. It will soak in a bit, and act more as a glaze.

It worked well in the squeeze bottle for painting the skeleton. 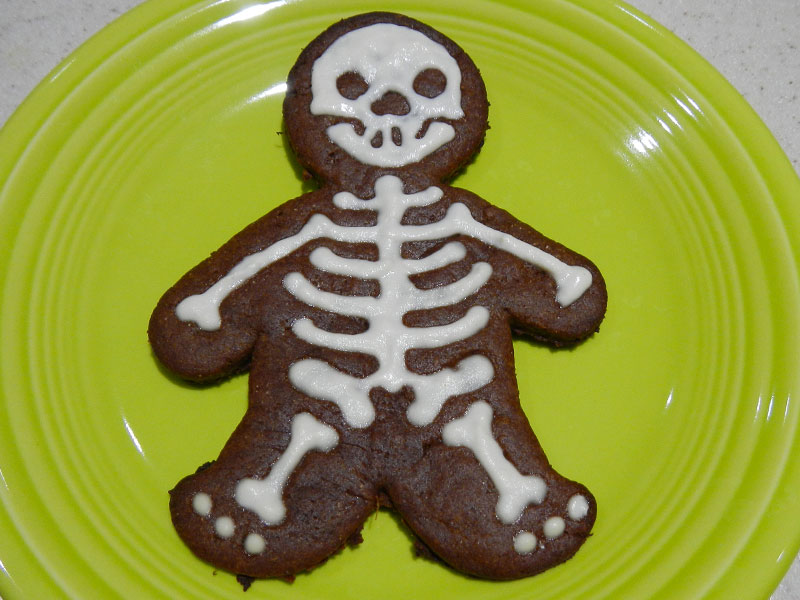 However, the next morning, after being in the refrigerator over night, it looks like this. 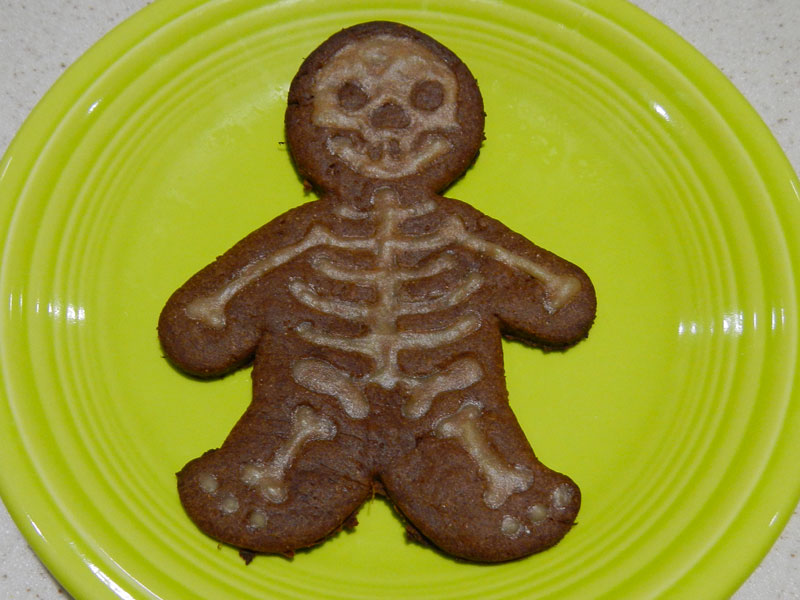 It’s interesting, but not what I originally had in mind. But… I did discover that it will glow under a black light! That works if you’re having a spooky, haunted house party! 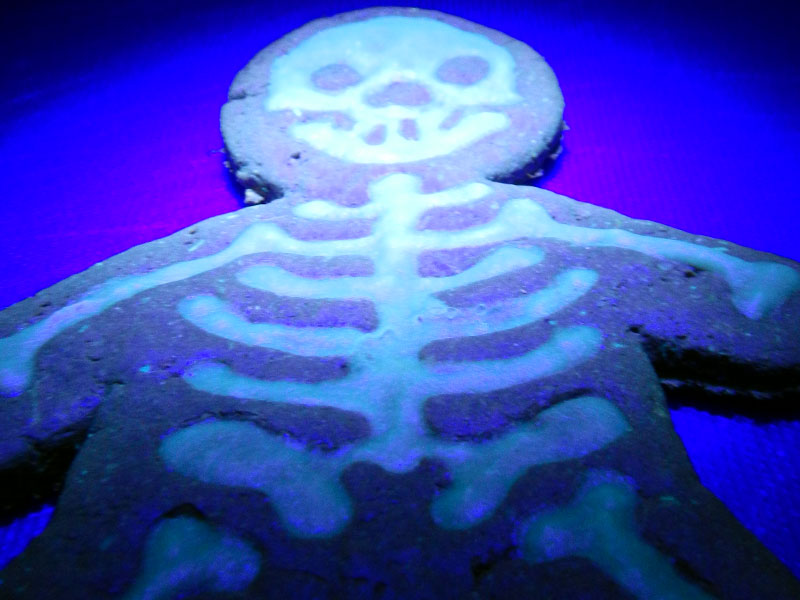 I had additional challenges when making these, as I discovered that my oven, which I had set at 350 degrees, was actually only 200 degrees. So you’ll notice that some of the cookies have almost burned feet in the picture of them on the cooling rack. That’s because I ended up cranking up the temperature of the oven too high to compensate.

I guess I had better call the repair men.

For my taste, I’m going to increase the cinnamon and nutmeg to 1/2 teaspoon, and add 1/4 teaspoon of allspice to this next time. I think it will give the flavor more punch.

Over all, the cookies aren’t too sweet, which is fine with me. They also aren’t strongly chocolate or pumpkin, just yummy.

I will make these again, using different shapes for Thanksgiving and Christmas… when the oven is fixed!