Because we eat a lot of hummus here, we are always looking for something crunchy to go with it. There are plenty of tasty chips and crackers on the market, but they all contain a fair amount of sodium. So my goal was to attempt making crackers in my dehydrator. 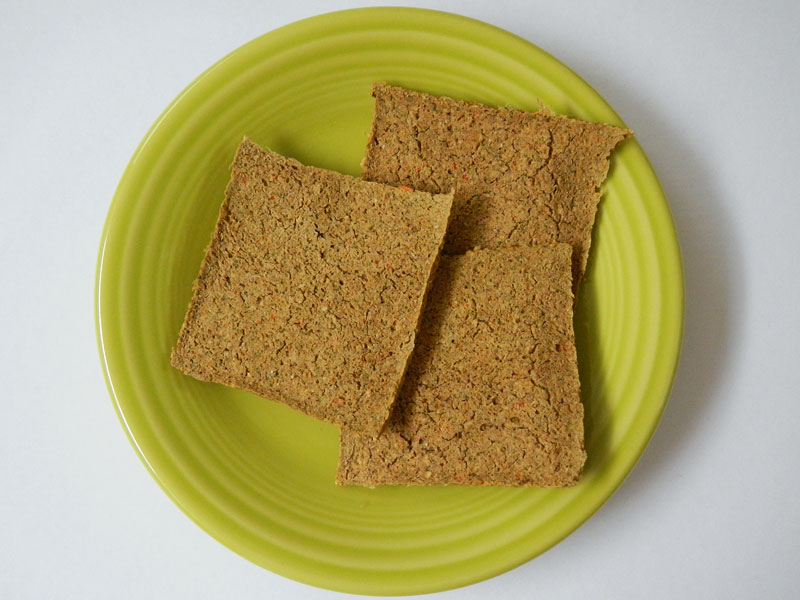 This was my first attempt at making crackers. I did have a bit of a problem getting it spread evenly on the sheets, so a few of my crackers were a bit thin in the middle. I think next time, I will make individual crackers and see how that works out.

We thought the texture of these was good, but they were slightly crumbly. I think if I make them just a little bit thicker that problem would be solved.

I was really surprised while they were drying. The house smelled like Flamous Brands Falafel Chips! These are one of our favorites, but we have to drive a fair distance to get them because none of the stores near us carry them. I must have hit a similar spice combination.

They didn’t taste quite the same as the falafel chips, but they were good. They also have a little burn or tickle at the back of the throat. That means that we prefer to eat them with something and not by themselves. Next time I might try using a pepper medley rather than straight black pepper. We found we couldn’t dip into the hummus with them because they broke too easily, but we could spread it on top and then eat it.

Over all, I will make these again!