Please note: this one is not gluten free because of the 5-grain tempeh used. 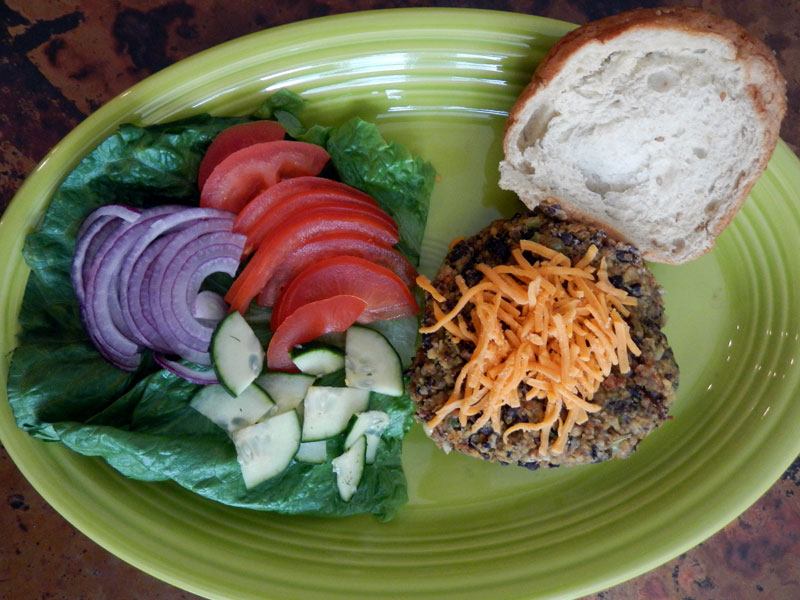 This is my first attempt at making a home-made veggie burger mixture. I used a food processor to make most of it.

Place beans in a large bowl and mash with a pastry cutter (it’s easier than using a fork!) I didn’t turn them into a paste, there were still chunks in them for texture.

Add veggies and pulse until everything is coarsely chopped to a texture you are happy with.

Mix the veggie/tempheh mixture into the beans. Add the spices and flax meal. Your mixture should be pretty dry. Mine was too dry to stick together well.

Add the chia gel and the olive oil. Mix well. The chia gel takes the place of eggs and adds moisture to the mixture. The olive oil keeps it from sticking to your hands while forming patties.

Form into 6 equal sized patties and place on a cookie sheet. (I used a 1/2 cup measure which worked well to scoop out the mixture. It made 6 nice patties.)

Place the cookie sheet in the freezer for at least 2 hours. These need to be frozen when cooked. If you want to make them ahead, that’s fine. You can store them in a plastic container with a sheet of wax paper between each patty. After they were frozen, I took them off the cookie sheet and put the other 4 away for another time.

We cooked these on a cast iron griddle on the grill outside. We sprayed the griddle with non-stick spray and cooked them on medium heat. It’s too hot to cook inside here. I used the griddle pan because I didn’t know if these would hold together well enough. I was worried that if they broke, they would fall through the grill grate.

We cooked them on the “grill” side of the griddle, which turned out to be a bad idea. Next time, we’ll use the flat side. Cooking time: 9 minutes per side. I actually think they should have cooked longer, to make them a little firmer, but they need to be on a flat surface. Plopping them frozen, onto the griddle cooled the griddle off a lot, so the cooking time was longer than expected.

The taste was really good, but next time I will add a pinch of salt.

The cucumber you see on the plate was actually Quickles . I marinated the thinly sliced cucumber in a mixture of rice and white basalmic vinegar. The spices were dill weed, dried diced garlic, mustard seed, and cracked pepper. I ended up adding some water and Stevia because I put in too much mustard seed and the vinegar was too strong at first. But, they were very, very good with the burger! The tart spicy flavor tasted like I had put pickles on my burger, but with NO salt added! I was thrilled with the combination!