You don’t have to make just savory tamales… You can also make sweet, dessert versions! The masa can be corn, chick pea, or whatever else you can dream up and stuffed with all kinds of fresh or dried fruits and nuts.

When I was in Santa Fe during Christmas Week one year, someone told me about their particular family’s tradition of adding some brown sugar and cinnamon to the corn masa and stuffing them with a mixture of Granny Smith apples, raisins, butter and more brown sugar. I could see by the dreamy look in her eyes that these were a strong happy memory of the holiday season for her.

This time, I used things I had on hand to make my filling.

Note: I apologize, but for some unknown reason, I forgot to take pictures of the setup!

This is about as simple as it gets! Put everything into the cold pan. Stir well to mix and coat all the fruit with the sweetner and oil.

Put the pan on low heat and cover.

Cook until all the fruit is cooked through, stirring occasionally.

If, for some reason, the mixture is too dry and the fruit isn’t cooked yet, you can add water, one tablespoon at a time. But keep in mind that the finished mixture is supposed to be fairly dry, without a lot of liquid, because it’s going into your tamales! 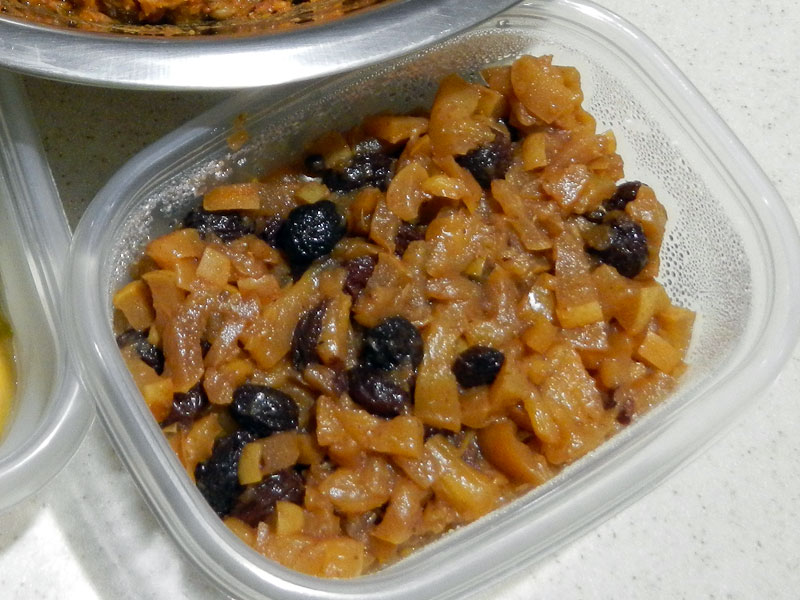 You can actually make up your own fruit mix and cook it the same way. Mix dried fruit with fresh and or frozen, sweeten and add spices to taste. Use whatever you like. To be totally honest, canned pie filling will work, too. You don’t have to cook it, but it will be harder to handle if it’s very wet.

If you choose to add nuts to the filling, the best way to do it is to chop them, and add them when you are stuffing the tamale. If you cook them, they will get soft, and I think the crunchy contrast is better if you add them later. Another alternative is to chop them and sprinkle them on top when you’re serving. That skips cooking them entirely!

The Mac Nut Oil is to add a buttery taste to the mixture. You really don’t want to leave it out, it makes a difference!

If you haven’t made the masa for this yet, you could add cinnamon and a bit of the Coconut Crystals to it when you make it!

Any left over filling (after making the tamales) can be frozen for the next batch, or put it (cold or warm) over pancakes, waffles, or your morning cereal!

I used the chick pea masa for these, and I didn’t add the extras to it. I wish I had, I think they would have been even better. Here’s what the inside of a finished tamale looks like.

The sauce is a light caramel sauce made with the Coconut Crystals, Coconut Nectar, Mac Nut Oil, coconut milk, cinnamon and vanilla. It should really be darker, but I was making it right before serving and ran out of patience. It still tasted great! And the pecans added both flavor and crunch. Actually, we liked the pecans with it so well, we added more while we were eating it!